Released in 1986, the video game Highlander came out the same year as the live-action Highlander film which started the whole Highlander franchise. The video game, which is a tie-in to the film, was published by Ocean Software for the ZX Spectrum, Commodore 64 and Amstrad CPC home computers.

The game was created in same style as arcade fighting games, and the player controls one of two swordsmen on the screen. It can be played in either single-player or two-player mode.

If you select single-player mode, you will play as Connor MacLeod, and will fight three opponents – one at a time. First, your mentor Ramírez, then Fasil (but the character is named Fizir in the game), and finally The Kurgan (named The Kerghan in the game).

When fighting, you win by gradually reducing you opponent’s health to zero, as this makes it possible for you to behead him.

The 1986 video game Highlander was panned by reviewers and did not become a commercial success. It was generally criticised for having blocky graphics, unresponsive controls and clunky gameplay, which made the game boring to play compared to similar beat-em-up video games available at the time. Players also disliked that the three levels of play (the three opponents) were so similar to each other. You had to load each opponent individually, but then they had the same moves anyway, differing only in appearance and health.

The graphics for the Spectrum release of the game was the same as those used for the Amstrad CPC and Commodore 64 releases. This was problematic, due to differing screen resolutions and monochrome vs. colours. The Spectrum version was rendered monochrome, which made the graphics – intended for a colour display – very messy and ugly.

Highlander: The Last of the MacLeods – an Atari Jaguar CD video game

In 1995, the Atari Corporation released “Highlander: The Last of the MacLeods”, a game developed exclusively for the Atari Jaguar CD.

It is a third-person single-player action-adventure game with polygonal characters presented on a pre-rendered 3D environment. Throughout the game, the player battles enemies to progress. 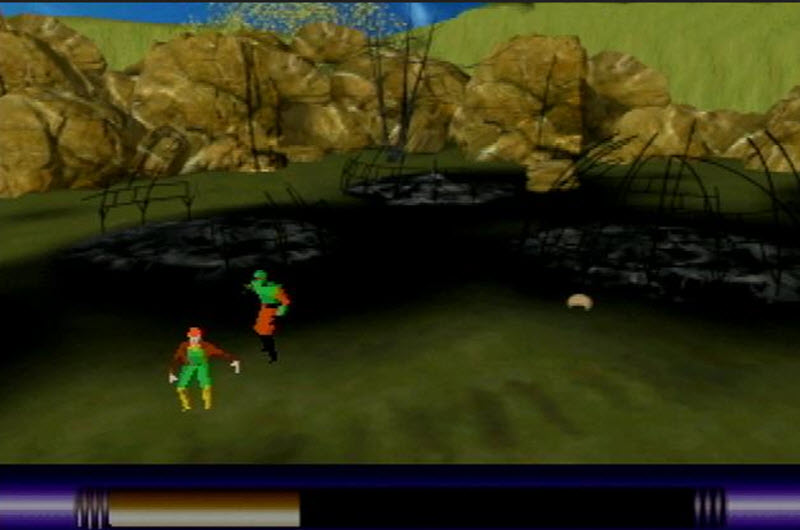 This game was intended as the first in a trilogy based on Highlander: The Animated Series (from Gaumont Multimedia and Bohbot Entertainment), but the two other games were never made. Also, the PC port developed by Lore Design was never officially released, thus remaining as an exclusive for the add-on.

Highlander: The Last of the MacLeods received mixed reviews. It was generally praised for its presentation, graphics, full-motion video sequences, but the sound design left players more divided, and many fans of action/fight games disliked the sluggish control response. Players more interested in the role-playing and exploration aspects tended to be more forgiving in regards to the controls.

You will play the character Quentin MacLeod, and your mission is to save the Dundee clan from the evil immortal Kortan.

The game is a combination of action-scenes and exploration.

It is possible to collect weapons and other items, but most enemies can be defeated without weapons. Collected items can come in helpful when solving puzzles.

Saving is possible if a Memory Track cartridge is present.