Highlander: The Card Game is a collectable card game based on the Highlander franchise. The core product was first launched in August 1995, but several additional product releases have taken place since then.

Players build their own decks from a 400+ card set and select to play as one of the available immortal characters from the franchise.

The culmination of the game is a sword duel where players alternately attack and defend by playing cards from their respective decks. A player wins when their opponent is reduced to zero ability and can no longer avoid being beheaded in the game. 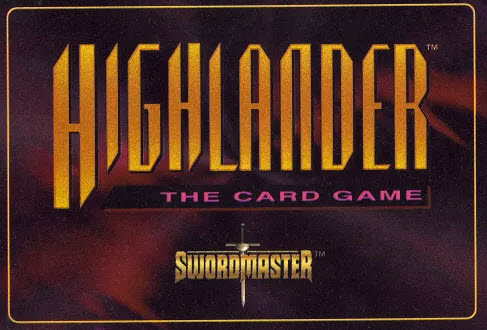 Nine attacks, i.e. one for each space on the attack grid.

Six blocks. Four of them are large enough to each cover four areas of the attack grid. The other two each cover the upper or lower row.

These are denfesive cards which can stay in place over multiple turns. They must be discarded if the player wishes to attack their opponent.

Edge cards modify other cards when played together with them. It is possible to play multiple edge cards in the same turn.

This concept was not introduced until a later expansion. May only be played from an exertion.