Highlander III: The Sorcerer is a 1994 fantasy action-adventure film and the third instalment in the Highlander franchise. The U.S. version of the movie is called Highlander: The Final Dimension and varies somewhat from the international version.

In Highlander III, Connor MacLeod must face a new enemy; the powerful sorcerer Kane who believes he can attain world domination by eliminating MacLeod.

In general, critics were not fond of Highlander III upon its release but acknowledged that it was better than the disastrous Highlander II. At the time of writing, it holds a 5% approval rating on Rotten Tomatoes based on 20 reviews. 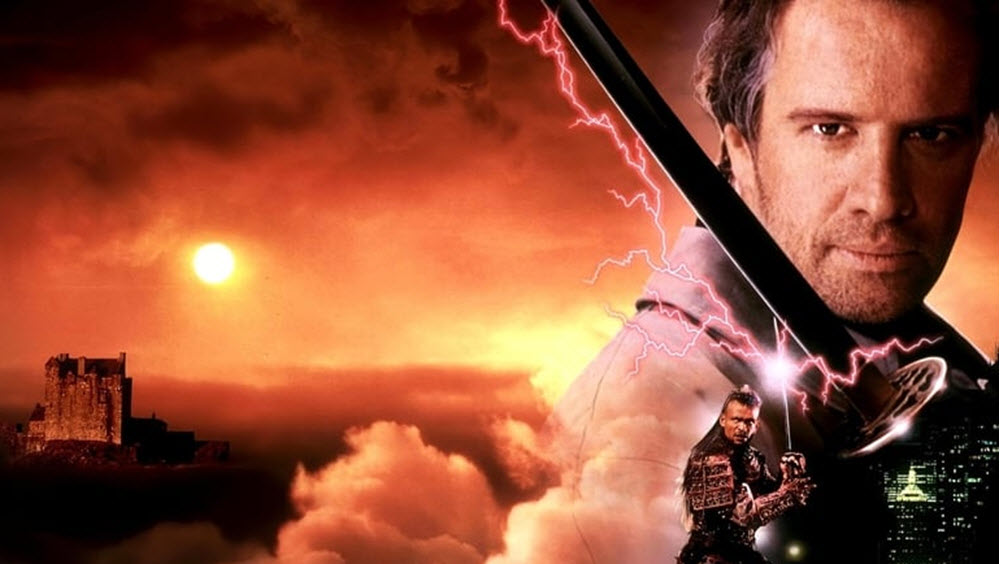 Some time after the death of his wife Heather in 16th century Scotland, the immortal Connor MacLeod moves to Japan to train with the immortal Nakano. Nakano is a sorcerer and was an old-friend of

MacLeod´s late mentor Ramírez; an immortal beheaded by the immortal Kurgan. MacLeod brings Ramírez katana to Japan and Nakano teaches him how to use it. Nakano also worns him of Kane, an evil immortal that is moving through Asia with his henchmen Khabul Khan and Senghi Khan.

Kane and his companions finds MacLeod and Nakano in a cave, and when Kane beheads the sorcerer he absorbs his quickening energy and magic power of illusion. Before dying, Nakano utters that Kane will not be present at the Gathering. MacLeod escapes the scene, but Kane and his companions are trapped as the cave collapses.

In 1788 France, MacLeod falls in love with Sarah Barrington who is visiting from England. During the French Revolution, he is captured and sentenced to death, but his immortal friend Pierre Bouchet secretly takes his place, claiming he is tired of life.

Barrington believes MacLeod is dead and marries another man. When he finally tracks her down, she has a family, and MacLeod decides to not reveal himself.

The Gathering occurs in New York City in 1985, and after it MacLeod is seemingly the last immortal left alive. He has earned The Prize, which means he is now a mortal which will age normally, can have biological children and will die at some point. He and his girlfriend Brenda Wyatt moves to Scotland and gets married.

In 1987, MacLeod and Wyatt are in a car crash which proves fatal to her, but leaves him without a wound, indicating that he may still be immortal – which could also mean that he did not win The Prize and that there might still be at least one other immortal out there.

In 1994, the archeologist Dr. Alexandra Johnson (who looks identical to Sarah Barrington) accidently frees Kane while excavating the cave in which he has been trapped. He beheads Senghi Khan to absorb his quickening energy, and Khabul Khan leaves to seek out MacLeod.

MacLeod, who is living with his adopted son John in Marrakesh when Kane is released, senses the release of quickening energy when Senghi Khan is beheaded. He realizes that another immortal is alive and rush to New York City, leaving John in the care of his friend Jack Donovan.

In New York, MacLeod assumes his old identity Russell Nash and kills Khabul Khan. When Khan´s headless body is found, Lt. John Stenn of the NYPD believes that the “head-hunter killer” of 1985 has struck again, and his suspicions falls on Nash who was a suspect in the original case.

Simultaneously, Dr. Alexandra Johnson identifies a piece of kilt from the Japanese cave as belonging to the MacLeod clan. Learning that Russell Nash claims to be a descendant of the clan, she tracks him down and sees him fight Kane. As the fight crosses into holy ground, MacLeod´s blade shatters and Kane escapes.

MacLeod returns to Scotland to forge another sword, but fails. Dr. Johnson, who now believes Nash is the long-ago banished Connor MacLeod, follows him and hands him a bar of finely refined steel from the Japanese cave. It is now possible for MacLeod to forge a new katana. The two become lovers, but the happiness is short-lived as MacLeod learns that Kane has kidnapped John.

MacLeod and Kane meet in an old church mission in Jersey City. The final battle takes place in an abandoned power plant, where MacLeod beheads Kane and truly wins the Prize. He has now accumulated the powers of all the other immortals who have ever lived. He also becomes a mortal again.

MacLeod, Dr. Johnson and John move to Scotland together.

The U.S. Theatrical release was rated PG-13. An R-rated Special Director’s Cut of Highlander III has been released on home video. It includes some violence and sex that was trimmed from the theatrical version to obtain the PG-13 rating. There are two reinstated sex scenes, and there is a shot where

Kane´s head rolls off. (The PG-13 version only show the head wobbling from side to side.)